It's week 2 of Newlywoodwards Dare to DIY party! Since Thanksgiving is this week, Kim is challenging everyone to bust out the china and spruce up the dining room table.

I actually have two different table settings to share with you today. (Why? because I'm queen of ridiculously long posts. Second only to Pioneer Woman.)

I didn't spend a single dime on either table. I simply went shopping throughout my house. And since my dining room table is currently covered in computer equipment (what else is new?), I used my kitchen table instead.

The first table setting is from our Friendsgiving & Game Night this past Saturday. 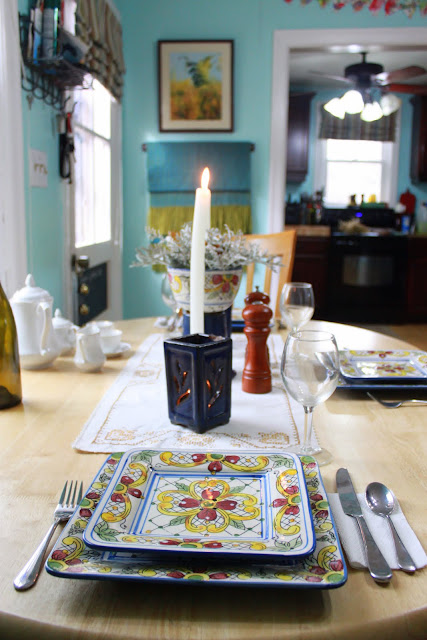 And the second is a practice round for when I host Christmas: 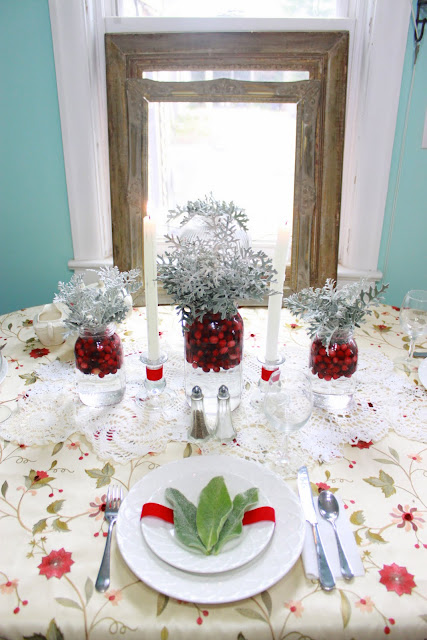 Let's start with the Friendsgiving table. We have 4 different family Thanksgivings to attend this year and we aren't hosting any of them. So, when we planned to have our semi-monthly game night with friends this past weekend, Stephen and I decided to turn it into a Friendsgiving Extravaganza. 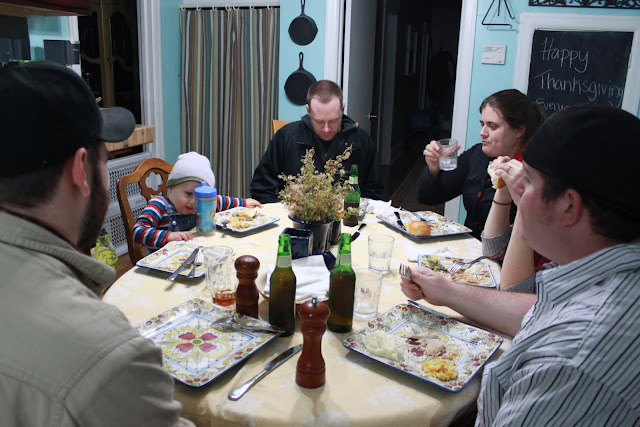 In other words, we ate on real dishes and had a Thanksgiving smorgasbord (as opposed to our usual Game Night fare of hot dogs and chips on paper plates). 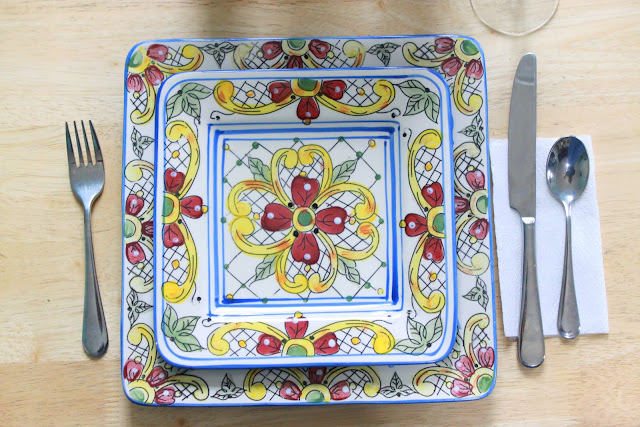 Tabletops Gallery - Venezia - Hand Painted
I really love these plates. They are so colorful and fun! They were in my Dad's kitchen when I raided his house earlier in the year. Score!
With Joseph's "help", I reset the table this morning so it would be a little less crowded. 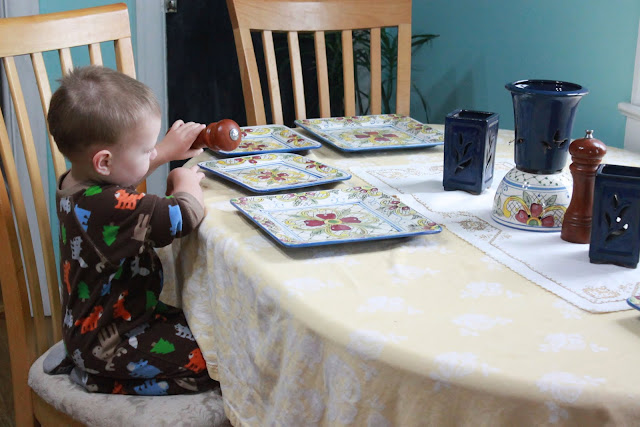 Who doesn't want salt on their plate?? It saves time later when you already have your food. Less salting. More eating.
I wasn't really aiming for a traditional Thanksgiving table. Just something pretty that I could enjoy. 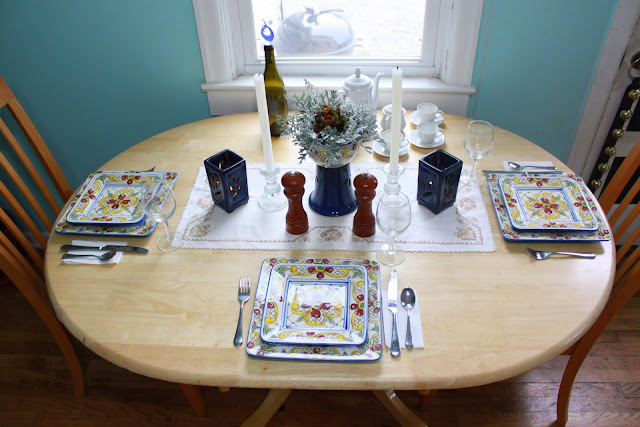 The runner is an antique linen that my Mom gave me a while ago. The porcelain coffee set was made in Poland and is also a gift from my Mom. Why is it on the this table? Because I like it and it makes me happy. So there. 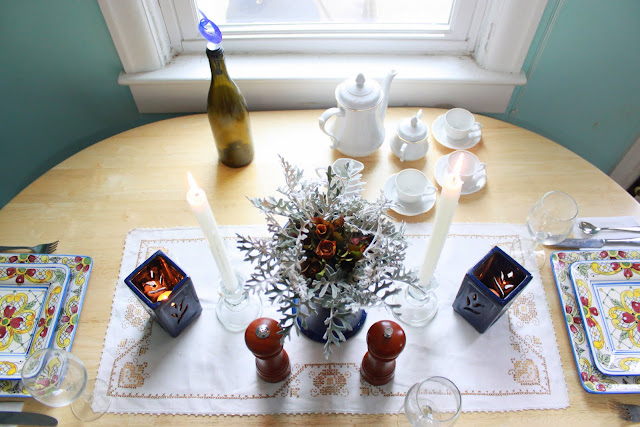 The blue candle holders were also swiped from my Dad's house. From the back patio, I believe. I flipped the middle one over and used it to prop up my bowl of "flowers": 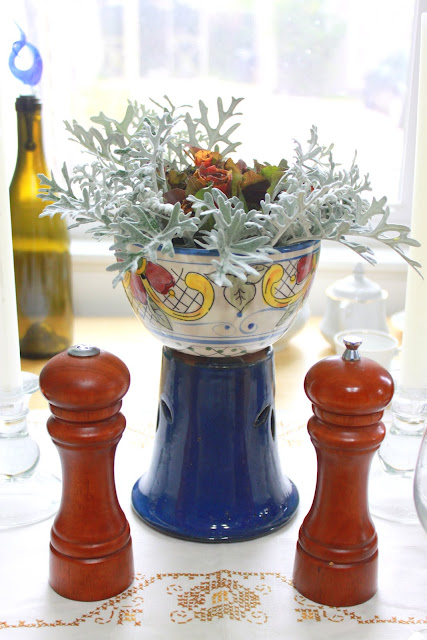 Aren't they pretty? It's a combination of Dusty Miller and fall leaf roses. 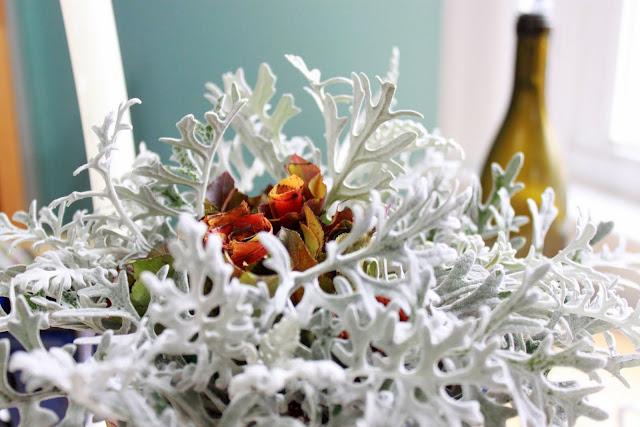 That's right. Those pretty flowers in the middle are actually rolled up leaves from the front of the house. I can't take credit for these. It was all Theresa (my sister) and Aaron's work. 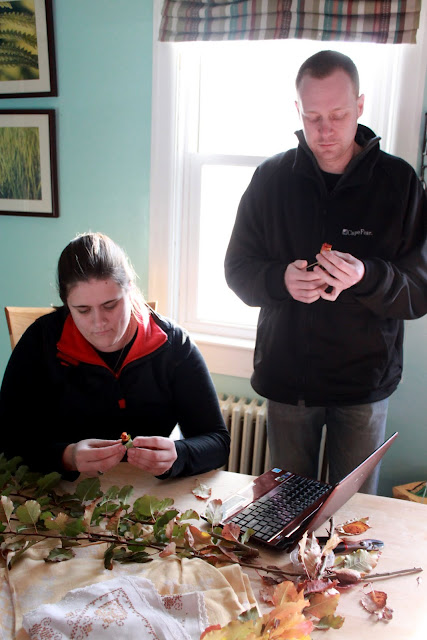 You know... Aaron, the guy who helped my husband rip down the living room wall. He's a cop. He has lots of guns. And a motorcycle. He's very macho. And he's rolling leaves into roses for me. I was so amused by this that I had to take a picture. 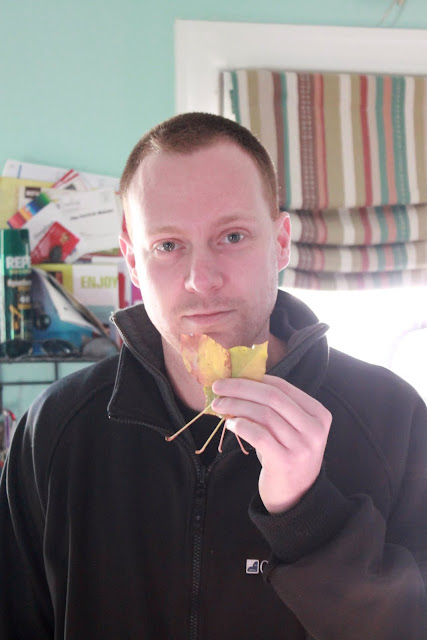 In his defense, I bribed him with really tasty food all weekend.
And I think they turned out beautifully... 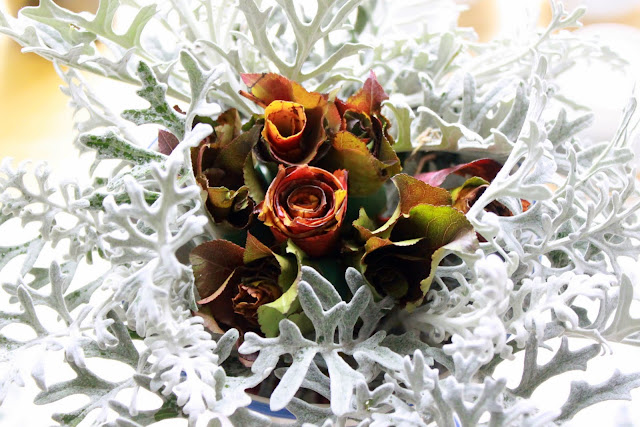 I kept seeing fall leaf rose bouquets like these on Pinterest, Craftzine, or Bower Power. So I decided that they would be just thing thing to lend an element of Fall and Thanksgiving to the table. So, that's this year's Friendsgiving table. Complete with chalkboard message: 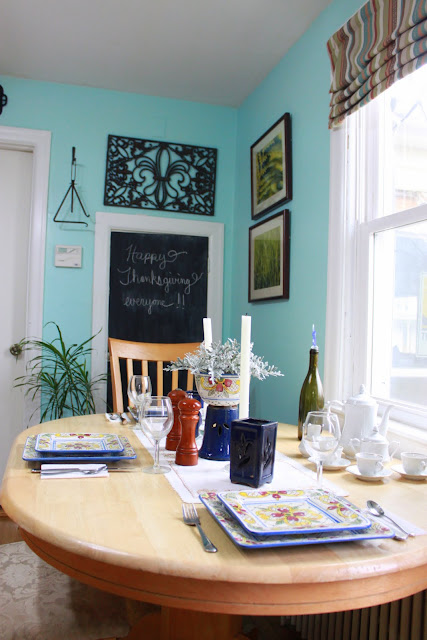 I really liked it. But my practice Christmas table? I lurve it. And I don't feel bad about putting it together before Thanksgiving Thursday because 1) I've already had two Thanksgiving feasts and 2) Stephen and I put up the Christmas tree last night: 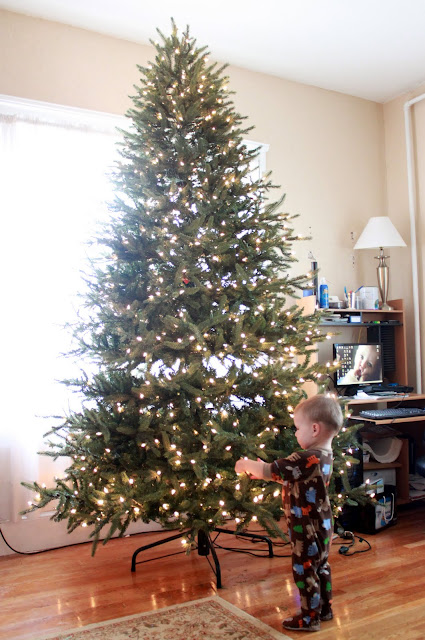 Fear not. It won't get decorated until after the official Thanksgiving Thursday. I have my limits. Anyways, on with the table! 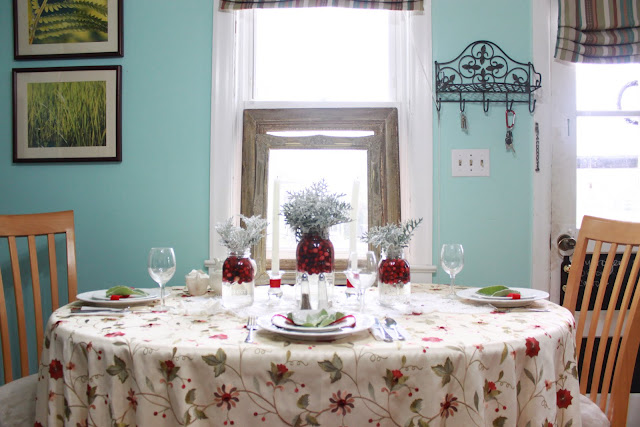 Yup. It's the greatest thing ever. 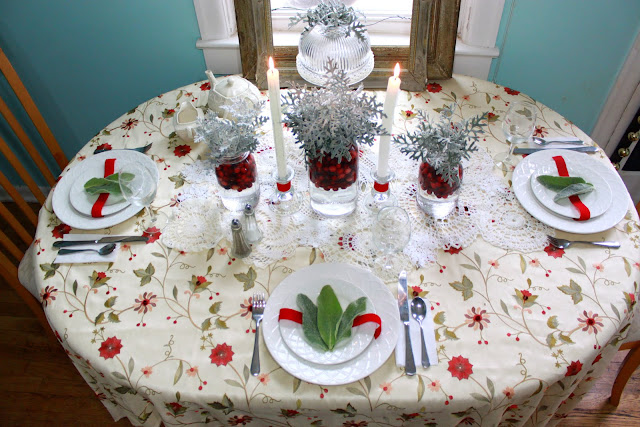 The "table cloth" is just a piece of fabric from my sewing bin. I adore this fabric, but I have yet to find a definitive place to use it. I was thinking curtains, but I don't know which room. So, for now, it's night lighting as a "table cloth". On top of that, I placed my newly DIYed doily runner (more on that next week). 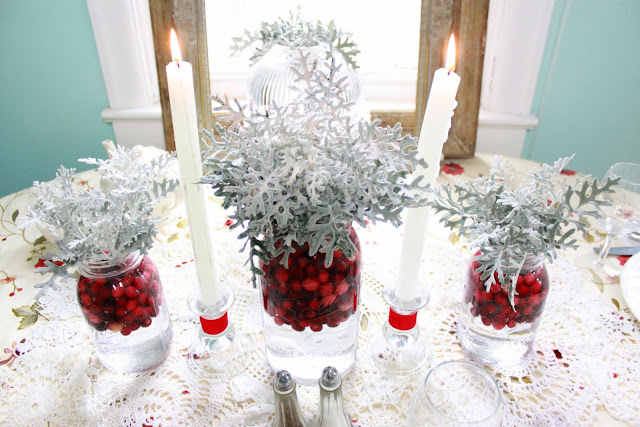 The centerpieces are just Mason Ball jars that I filled with water, dumped fresh cranberries in, and then stuffed with Dusty Miller from my front garden. 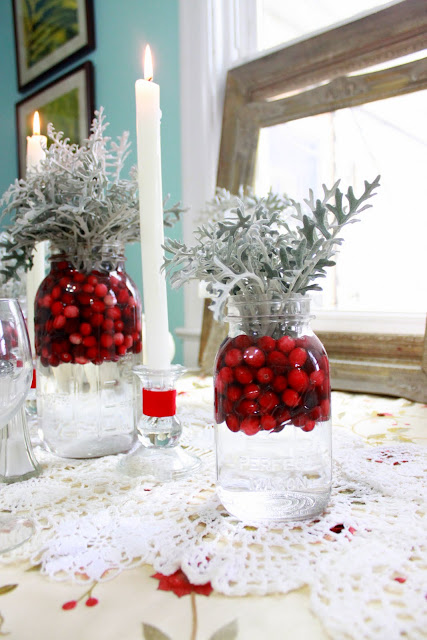 Easiest. Thing. Ever. And so cute!! 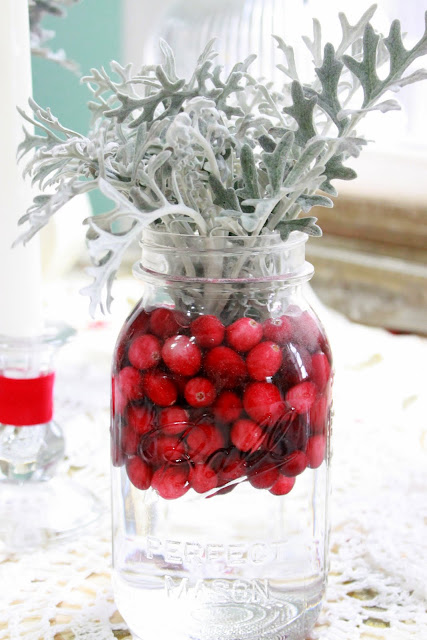 As for the candle sticks, I just wrapped a little ribbon around them to spruce them up. 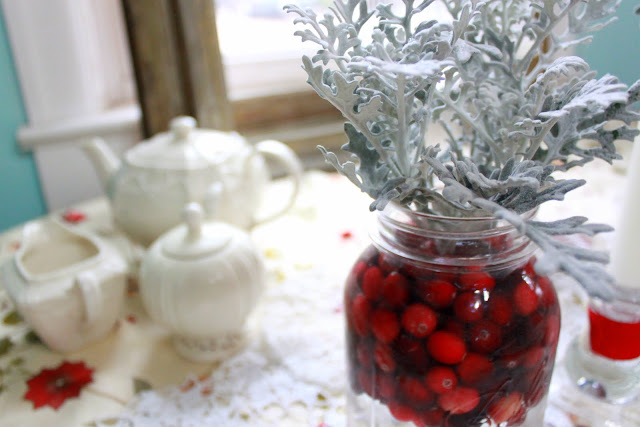 What? It wouldn't be my table if there wasn't a tea pot of some sort...
My cranberry centerpiece inspiration came from a combination of these two Pinterest pictures:

Source: bhg.com via Caroline on Pinterest
To give credit where credit is due, Joseph "helped" me put this table together too. 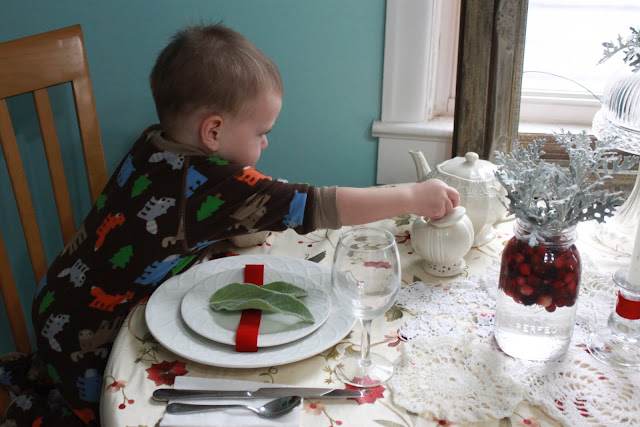 After all, he picked the fuzzy Lambs Ears leaves from the garden. I placed them on top of some red velvet ribbon on our everyday white plates. I love how simple and pretty it is. (Pretend that the ribbon isn't trying to escape. I didn't notice that until just now.) 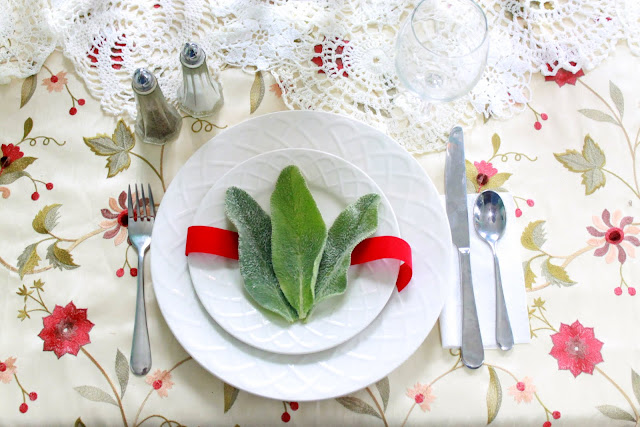 The old frames are actually photo props that I usually keep in the living room. They came off of some old portraits that Stephen's Grandmom gave me. 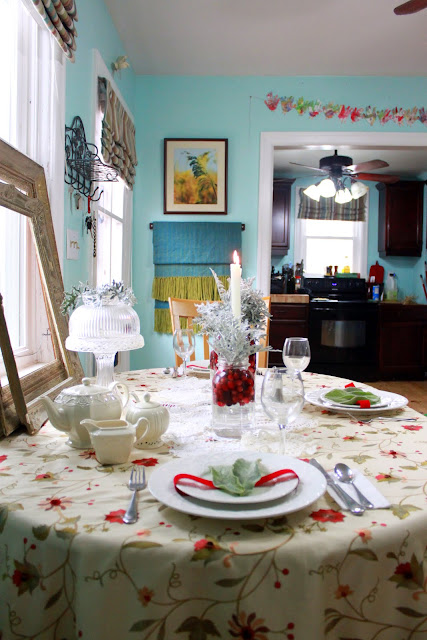 And did anyone notice the little lamp? These are from my wedding. You light a candle under the glass shade and the whole thing glitters like a chandelier. I don't know what they are officially called though. Anyone know? 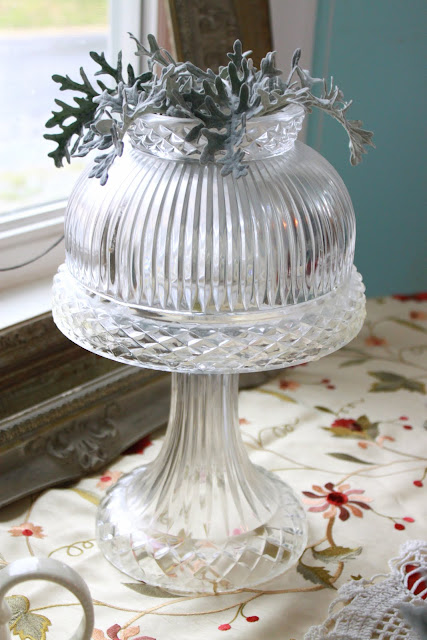 And to complete the whole table... Some chalkboard well wishes: 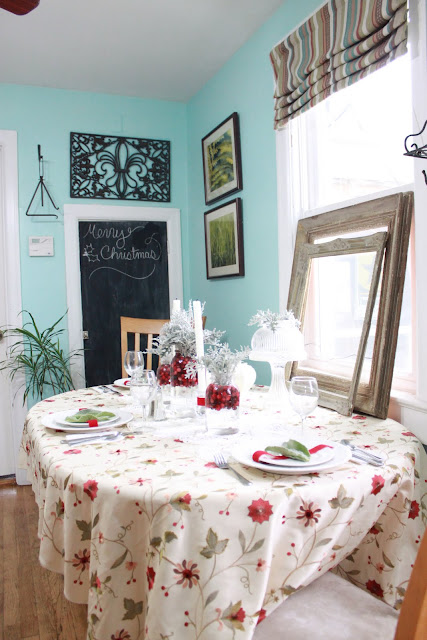 And do you know what this experience taught me?

I don't own a single cloth napkin or white linen table cloth. Seriously. Not one.

I'll have to look into that.
Posted by Unknown at 1:39 PM